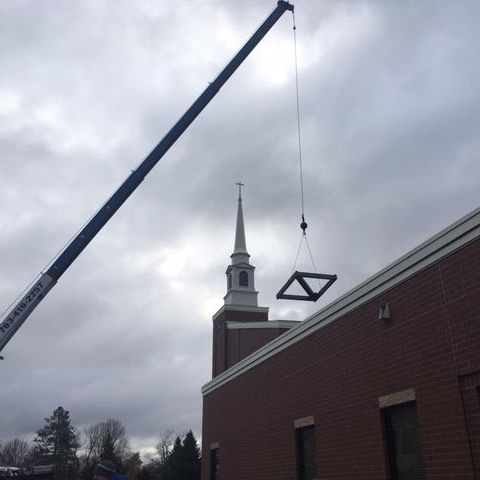 In early 2017, WCTS sent out a letter soliciting funds for a new satellite dish project. Some listeners thought maybe this would improve our radio signal and their reception of our radio signal. Unfortunately, the satellite dish has nothing to do with the strength of our AM signal. However, we do pull most of our programming from a couple of different satellite channels. The old dish was older than our building itself and was not functioning very well because it was warped out of shape. The remedy was a new dish.

Listeners responded splendidly to this appeal. WCTS collected more than enough money to undertake this dish replacement project. The dish parts were delivered, assembled on the ground, and then hoisted to the roof of the WCTS studios, using a large crane. Ironworkers welded the mount in place onto the steel structure of the building, and then the dish itself was attached. Later the dish was connected to our receiver units and aimed at the geostationary satellite. Costs for all of this came in slightly over the original estimate of $15,000. We owe many thanks to contract engineer/project manager Dan Zimmerman for overseeing the construction details. Be assured that money given over and above the amount needed for the dish project will be used for future projects.