The Fundamentalists and Billy Graham

Some of you new students may not understand just exactly why we take the position we take in regard to Billy Graham’s ecumenical evangelism…. Billy Graham and I have been for many years personal friends. This is not a personal difference between my father and Dr. Graham—that is what defenders of Dr. Graham’s policies try to imply. There is nothing personal in our stand. I would to God that Billy Graham were following a Scriptural program so we could endorse it. We are against anything unscriptural; and, therefore, we have to take a stand against this ecumenical evangelism, even when it is our friends who are guilty of Scriptural disobedience. It is not because Dr. Graham is involved—it is in spite of the fact that Dr. Graham is involved—that we have to take our stand…. I am not questioning Dr. Graham’s sincerity; I am not questioning his motives. I am only saying that what he is doing is unscriptural; and, therefore, Bob Jones University cannot endorse it.

The fundamentalist movement took shape around two great controversies. The first was a struggle with religious liberalism for control of the old, main-line denominations. Fundamentalists lost that fight almost everywhere. As they exited their denominations, they built up a large, independent network of both new denominations (e.g., the IFC and the GARBC) and non-denominational institutions. These institutions included schools, missions, book houses, magazines, papers, evangelistic agencies, inter-church councils, radio ministries, and youth organizations. By the 1940s this fundamentalist network had become a powerful vehicle through which American fundamentalists were working around the world.

The second great controversy was a contest with neoevangelicalism for the soul of this fundamentalist network. Cracks in fundamentalist solidarity appeared as early as 1941-42, when the ACCC and the NAE took conflicting positions on the practice of ecclesiastical separation. Neoevangelicalism congealed as a party in 1947 with the founding of Fuller Seminary, the launching of Christianity Today, and the organization of the Conservative Baptist Association. The real contest, however, began in about 1956 with the buildup to evangelist Billy Graham’s New York City crusade.

The debate was over Graham’s use of non-Christians (as the fundamentalists saw it) in leadership positions during his crusades. By adopting this policy of “cooperative evangelism,” Graham made himself the de facto captain of the neoevangelical cause. Harsh words and harsher deeds followed on both sides. So stern were the fundamentalists’ words that some assumed they felt only contempt for Billy Graham. Others have suggested that there was bad blood between fundamentalists and Graham from the time that Graham left Bob Jones College as a very young man. Neither perspective is correct.

Below is a photograph taken in 1949, when Billy Graham was the president of Northwestern Schools in Minneapolis. It shows a spoof, a skit during a relaxed moment at Northwestern. In the picture, Richard V. Clearwaters stands as if teaching a class. In the back row of the class sits Marie Acomb Riley (W. B. Riley’s widow) wearing a dunce’s cap. To her left, and hamming it up for the camera, is President Billy Graham.

Clearwaters was the pastor of Fourth Baptist Church in Minneapolis. He was, and would remain until his death, one of the most important voices within separatist fundamentalism. He was also the dean of the seminary at Northwestern. When Northwestern closed its seminary in 1956, Clearwaters (with the blessing of Northwestern) picked up the pieces and reorganized them into Central Baptist Theological Seminary—at almost exactly the moment when Billy Graham was committing to cooperative evangelism. Clearwaters opposed the direction that Graham took, but he never stopped loving Billy Graham.

The next year, the Minnesota Baptist Convention established Pillsbury Baptist Bible College, which called Monroe Parker as its president. Parker had been a powerful influence over the young Billy Graham. At one time Graham claimed to have been saved under Parker’s preaching. He later decided that he had actually been converted earlier, under the preaching of Mordecai Ham—but he still recognized the importance of decisions made with Parker. Parker was a seasoned evangelist who brought Graham along in that calling. Parker was also a leading voice for separatist fundamentalism, and after 1956 he and Graham found themselves opposing each other’s policies. To the time of his death, however, Parker would discuss Billy Graham with a tear in his eye and a tug in his heart. Monroe Parker never stopped loving Billy Graham.

Bob Jones Sr. was one of the most important evangelists of the older generation. Graham attended Jones’s college in Cleveland, Tennessee, before transferring to a school in Florida. Contrary to what some have thought, Bob Jones kept up a relationship with the young Graham, and so did his son, Bob Jones Jr. Over the years Billy was a welcome guest in the Jones home. As he developed into a powerful evangelist, the Joneses believed in and supported his ministry. They only parted ways when Billy chose to pursue cooperative evangelism. For years after that debate began, however, Bob Jones Jr. was still publicly professing his friendship for Billy Graham. As nearly as I can tell, the Joneses never stopped loving Billy Graham.

During the 1950s no fundamentalist was closer to Billy Graham than John R. Rice. Not only was he a significant backer of Graham, but Graham also served on Rice’s board. When Graham committed himself to cooperative evangelism in 1956, no one felt the rupture more deeply than Rice. The older evangelist shed many tears when he found himself opposed to his younger protégé. But John R. Rice never, ever stopped loving Billy Graham.

Anyone who wants to understand the fundamentalist view of Billy Graham has to remember just how deeply Billy was loved in fundamentalist circles and how heavily fundamentalist leaders had invested in his ministry. When Billy adopted the method of cooperative evangelism, they could hardly believe it. Worse, Billy was using his old, fundamentalist connections to draw people into cooperative evangelism after him. That is when disbelief gave way to disappointment, and disappointment to a necessary, public opposition. The difference was a serious one, and these leaders felt the need to say something, since Graham threatened to sweep their followers after him by the strength of his charisma. They felt perplexed and betrayed. But they never stopped loving Billy Graham, even when they disagreed publicly and sharply with his methods.

Those leaders of separatist fundamentalism all went to be with the Lord in heaven long ago, but their young protégé lived to ninety-nine years. Then last week he, too, slipped home into heaven. By now he has embraced Monk, and Doc, and John R., and the Joneses. Fellowship that was broken more than half a century ago has now been healed, and it will never be broken again. We long for the day when that can be said of all of us. 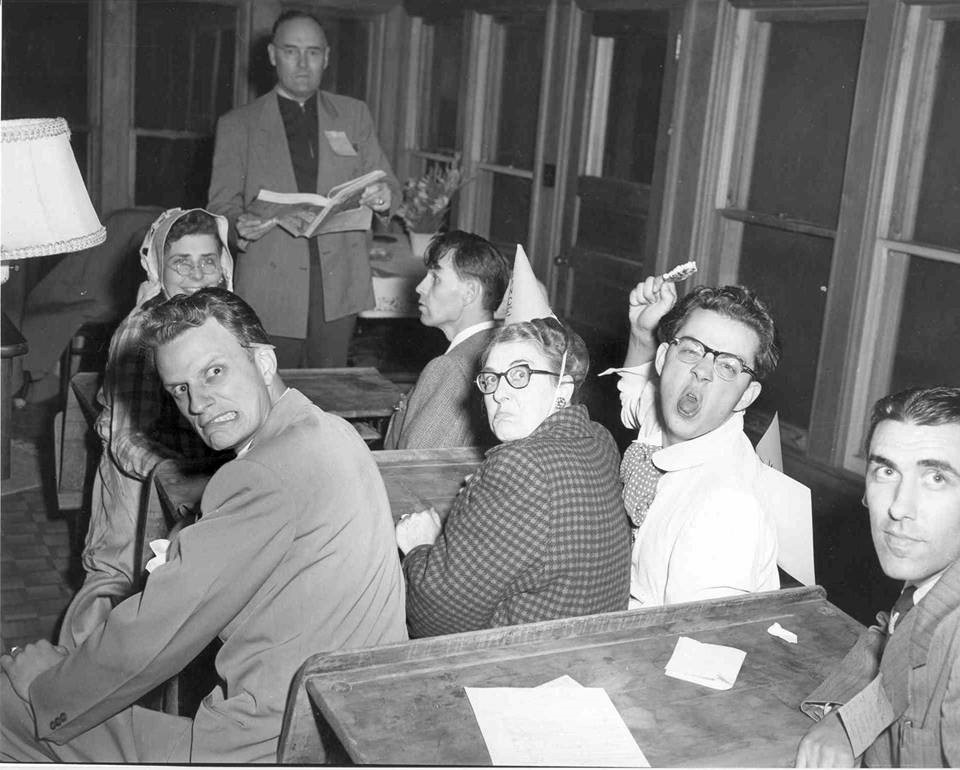 This essay is by Kevin T. Bauder, Research Professor of Historical and Systematic Theology at Central Baptist Theological Seminary. Not every one of the professors, students, or alumni of Central Seminary necessarily agrees with every opinion that it expresses.

Thou Hidden Love of God

Thou hidden Love of God, whose height,
whose depth unfathomed, no man knows,
I see from far Thy beauteous light,
and inly sigh for Thy repose;
my heart is pained, nor can it be
at rest till it finds rest in Thee.

‘Tis mercy all that Thou hast brought
my mind to seek its peace in Thee;
yet, while I seek, but find Thee not,
no peace my wand’ring soul shall see.
O when shall all my wand’rings end,
and all my steps to Thee-ward tend?

Is there a thing beneath the sun
that strives with Thee my heart to share?
Ah! tear it thence, and reign alone,
the Lord of ev’ry motion there;
then shall my heart from earth be free,
when it has found repose in Thee.

O hide this self from me, that I
no more, but Christ in me, may live;
my vile affections crucify,
nor let one darling lust survive;
in all things nothing may I see,
nothing desire, or seek, but Thee.

O Love, Thy sov’reign aid impart
to save me from low-thoughted care;
chase this self-will from all my heart,
from all its hidden mazes there;
make me Thy duteous child, that I
may ceaseless “Abba, Father,” cry.

Each moment draw from earth away
my heart, that lowly waits Thy call;
speak to my inmost soul, and say
“I am Thy Love, Thy God, Thy all.”
To feel Thy pow’r, to hear Thy voice,
to taste Thy love, be all my choice!