“The light shines in darkness and the darkness has not overcome it.”

Tonight, many liturgical and reformed churches will celebrate the medieval Tenebrae service, or service of darkness. Throughout this solemn event, candles are extinguished until only one is left. Darkness and shadows evoke sobriety, resembling the period of darkness during the crucifixion. Gospel readings, prayers, and meditations punctuate the service until the final candle is extinguished and the congregation erupts in a strepitus, a loud noise that represents the final cry of Jesus, ensuing earthquake, and tearing of the temple veil. After this cacophonous sound the congregation leaves in silence, reflecting on the terrible price of sin. 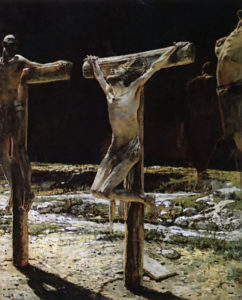 “The Crucifixion,” as painted by nineteenth-century Russian artist Nikolai Ge, depicts a graphic, non-stereotypical  version of the death of our Lord. Ge is one of my favorite realist precisely for that reason. This painting was banned from public display by imperial authorities on the grounds of blasphemy because Christ was shown as too human, too wretched. Ge was masterful with shadows and light and this painting represents a clear juxtaposition of the two. The ghostly Roman soldier, resembling the emptiness of rejecting Christ, disappears into the darkness, darkness that engulfs the painting, darkness that engulfed the entire land. A sign lies on the ground, perhaps falling as the earth shook. Against the black, however is a brilliant light. Its source is unclear and position confusing but its presence unmistakable. How can there be light in such darkness? The light covers the face of the penitent thief and illuminates Jesus. Human agony is on display as the God-Man cries his final cry. Jesus is the only bright figure. He is the man of light and the Light of men. Though the darkness weighs down the painting, light is undeniable.

My own tenebrae is quite similar. Tonight I will solemnly remember the darkness of that terrible day. The weight of darkness is the weight of my sin, crushing the spotless One. My strepitus is loud and dissonant. The crescendo of the climax of rebellion, the murder of the most innocent among us. I hated the light and loved the darkness. Yet, light remained. The dark cries of “crucify” only further illuminated the Light.

If only the soldier would turn away from the enveloping darkness and look at the Light.

“Truly, this man was the Son of God.”

“But while we were still sinners, Christ died for us.”

God is light, in whom there is no darkness at all.
Jesus Christ is the light of the world.

And this is the judgment, that the light has come into the world,
and we loved darkness rather than light.

This site uses Akismet to reduce spam. Learn how your comment data is processed.