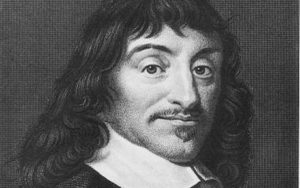 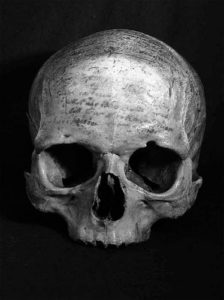 I just finished a great book – Descartes Bones: A Skeletal History of the Conflict Between Faith and Reason. In it, NY Times best-selling author Russell Shorto retells the fascinating tale of Descartes’ remains and compares their history to the philosophical journey of modernity.

On a cold night, in the middle of the Swedish winter in 1650, the French humanist René Descartes died. Descartes was in Stockholm at the invitation of his friend and protégé, Pierre Chanut, to personally tutor the young queen Christina. Since Descartes was a staunch Catholic in a Protestant nation, his remains were quickly and quietly laid to rest in the frozen ground just outside of the capital. 16 years later, after entropy and modernity had begun, his decomposing remains were exhumed and taken to France on the authority of Louis XIV. Upon arrival in France, the skull and the right index finger were missing; the finger being a personal souvenir of the French ambassador to Sweden and the skull inexplicably gone, a literal dualism. In June of the following year, Descartes, sans head, was laid to rest for the second time after much ceremony in the churchyard of St. Geneviève in the center of Paris.

For more than a century, Descartes’ ideas evolved as his bones decayed. The philosophy of doubt lead to the politics of revolution. In 1793, after anti-Catholic and anti-royal mobs prevailed, the story of Descartes’ remains took another twist. By decree of the newly formed De La Convention Nationale, the patron saint of modernity was scheduled to be moved to lay in state in the new, hastily-conceived Pantheon. This decree, like the revolution, the idea of a French Pantheon, and the unfortunate lives of the French la noblesse, was short-lived. Alexandre Lenoir, a purveyor of French art, claimed that he transferred Descartes’ remains from a wooden box to an Egyptian-like sarcophagus. By this time the remains had become mere dust and shards. Lenoir’s collection was on display in the Museum of French Monuments. Many doubted (pun intended) Lenoir’s story and believed that Descartes’ bones were lost to either a desecrating revolutionary mob, the 1807 excavation of the church grounds for a new road, or the cold apathy of natural processes. In 1817, under Louis the XVIII’s authority, Descartes’ (supposed) remains were unearthed once more and ceremoniously reinterred, under the careful watch and honor of the French Academy of Science, just outside the Abbey of Saint-Germain-des-Prés.

The tale takes another turn. In 1821, a Swedish chemist named Berzelius, produced a skull (without the jaw) that was had an ink-filled inscription that read, “The skull of Descartes, taken by J. Fr. Planström, the year 1666, at the time when the body was being returned to France.” The front of the skull also had an inscribed poem:

“This small skull once belonged to the great Cartesius,
The rest of his remains are hidden far away in the
land of France;
But all around the circle of the globe his genius
is praised,
And his spirit still rejoices in the sphere of heaven.”

When this skull arrived in France, the famous scientist/zoologist/creationist/devout Christian, Georges Cuvier, one of the premier member of the Academy of Science, embarked on a multi-year examination of the skull. The skull of the man that wrote Discourse on Method was thoroughly examined using quintessentially modern techniques. Interestingly, Cuvier’s method mostly employed the 19th cent. popular science of cranial phrenology and visual/dimensional comparisons and measurements based upon a (possibly fake) portrait by Dutch master Frans Hals. Cuvier was finally convinced and declared the skull authentic. Others, however, were unconvinced. The skull was exhibited in the Academy of Sciences for nearly another century. During that time, Descartes’ skull was repeatedly examined and deductions were repeatedly made. Ideas were inferred and propositions declared. In the end, in another twist of irony, the clarity of some and the skepticism of others boiled down to belief. The cranial examination of the father of modernity become a not-so-living embodiment of the tensions within modernity.

On the morning of January 21 1910, the city of Paris flooded. As the Seine swept into central Paris, the city, a beautiful temple to the accomplishments of man, was overtaken by the sheer power of nature. Much like the Great War a few years later, this event signaled the inevitable collapse of modernity. The philosophy of doubt began to be doubted as Descartes’ skull was nearly lost, once again, as relics and remains were haphazardly stacked and hastily evacuated.

Shorto appropriately ends with this:

“The Cartesian tendency of favoring mind over matter – mind over body- thus has a metaphorical cap. The skull – the representation of mind – having been subjected to repeated and increasingly sophisticated scientific study and judged to be authentic, sits enshrined in a science museum, le Musée de l’Homme . . . . Indeed, as I write, it is a part of a special exhibition at the Musée de l’Homme entitled Man Exposed, sitting beside a Cro-Magnum skull to demonstrate the breadth of human thought and accomplishment over the millennia, once again, serving as the very representation of ‘modern.’ As for the body, the trail ends abruptly, veering sharply into oblivion. And that perhaps as it should be. Dust to dust. In secular seculorum” (pg. 231).

Modernity, like Descartes’ remains, remains enshrined yet decomposing. Its head, like Descartes’ ideas, is both certain and doubtful. Mankind tragically defines itself through itself. To doubt is to know and knowledge is undoubted. This cannot last. Modernity is veering sharply into oblivion. All men and their ideas come from dust and to the dust return . . . To our God and Father be glory for ever and ever.

I highly recommend this book.

This site uses Akismet to reduce spam. Learn how your comment data is processed.